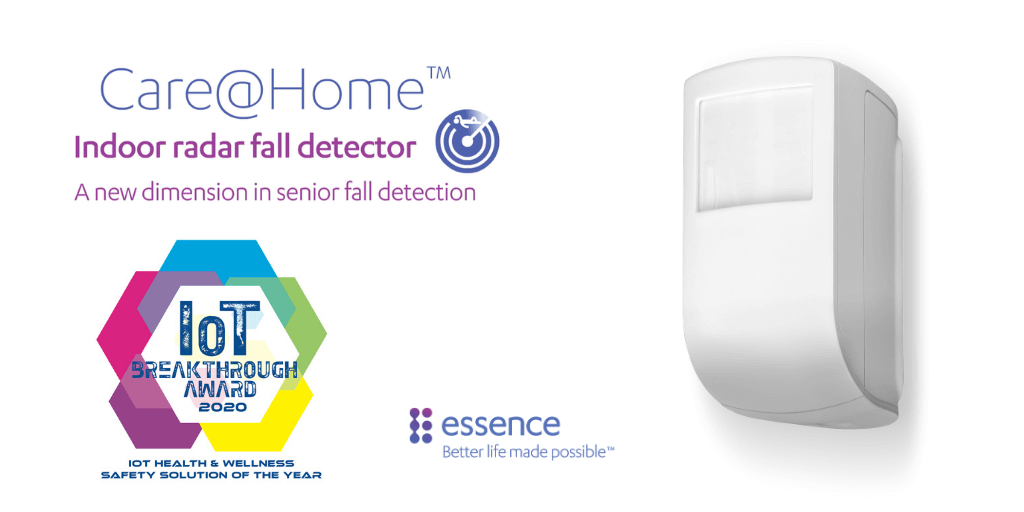 Leveraging decades of experience delivering innovative IoT platforms and sensors for the security and senior care sectors, Essence has developed a revolutionary device that improves the lives of seniors by using radar technology that can track the positioning of seniors, and, most crucially, provide immediate detection in case of falls. Using cutting edge TI mmWave technology, the Essence’s new Fall Detector is a battery-operated wireless radar-based device that improves independence by providing accurate fall verification – immediately alerting healthcare providers if a person falls over.

The radar forms part of the Essence SmartCare’s Care@Home senior monitoring platform. The platform uses an integrated series of devices placed around the house with a variety of safety measures including an activity monitoring, physical and verbal panic buttons and various fall detection and prevention methods.

The announcement of the new radar system has significant positive repercussions for the elderly care market. A recent study found that 95% of elderly people want to live alone in later life. Of those elderly people living alone, a third fall each year. Falls can have serious consequences, with 88% resulting in hospitalisation. The tragic fact for many is that many falls go unnoticed for several hours: 60% of people spend 12 hours on the floor and 50% of falls are not reported to the doctors at all. The development of a new, cutting-edge radar fall detector enables these risks to be significantly reduced, empowering elderly people to live independently.

This new fall detector uses a specialised application programming interface (API) that adapts the TI mmWave radar technology to create this unique application. The device has already garnered two respected industry awards for innovation in its pre-launch phase. The most recent, the IoT Breakthrough Award 2020 is part of the IoT Breakthrough Awards program that recognizes the innovators, leaders and visionaries from around the globe in a range of IoT categories, including Health and Wellness.

Dr. Haim Amir, CEO and Founder at Essence said: “Independence in later life shouldn’t come at a cost. The use of innovative radar technology significantly increases the accuracy of fall detection, giving piece of mind to caregivers while allowing residents to live freely. By collecting detailed information, we can tailor our response to reduce risk and provide round-the-clock care. Care@Home maintains the privacy of the resident while giving healthcare providers accurate alerts that include the resident’s location in the house, allowing assistance to arrive quicker. This is a gamechanger for the elderly care market.”

Robert Ferguson, manager at Texas Instruments said: “The 3D sensing and on-chip processing capabilities of TI mmWave sensors are opening the doors for applications that require privacy-conscious, intelligence at the edge. Essence has taken advantage of the accuracy and intelligence of our technology to develop an innovative product for today’s elderly monitoring applications.”